My Tomato Plants & Pepper Plants are covered in what I believe to be whiteflies and I cannot seem to get them under control! I thought I’d try my hand at releasing ladybugs onto my plants. They’re probably the most natural pest control a garden can have and as a gardener, I would be lucky to have them around. They prey on several pests, and I read, on whiteflies.

I bought a pack of 1500 live bugs from Amazon- about $11 with shipping, although I just checked and noticed the price increased to $16 plus shipping.

1500 sounded like way too much, and I was leaning toward buying the 300 pack, but the larger bag was actually cheaper!

I wasn’t ready to release them yet, so I put them in the refrigerator for 2 days. The informational page that came with it said they can be in there for up to 2 weeks.

I had read about things to do to prepare your garden for a ladybug release, so I did a couple things. I only have a few plants in various containers, spread around two sides of the house and I was worried that wouldn’t be enough to keep them around. So, I planted a few flowers as well hoping they would provide some food and shelter.

And just as the sun was setting… 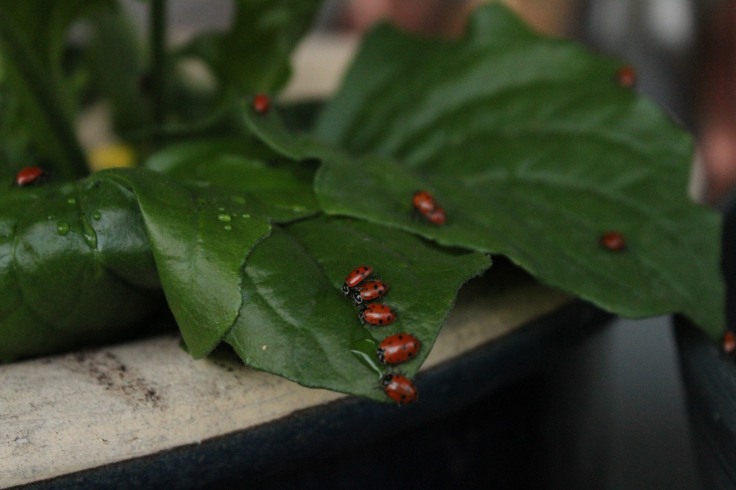 Well it was fun watching them spread around, and I saw a few fly away almost immediately, and was glad I got the 1500 pack.

I took a quick glance in the early morning to see how many ladybugs had stuck around….and it had appeared that most had left the garden already. I thought, well, if they at least ate the bugs that were infesting my plants and then flew away, I could call that a success.

When I got home from work later that day, I was able to get a better look…and only a few were left, and I don’t believe the whitefly population had decreased. Oh well. Maybe my small garden didn’t provide enough food/shelter, or for some other reason they were not interested in staying, but it was worth a shot.

So, if anyone has had any luck with controlling whiteflies, let me know your secrets! Anyone had luck with releasing ladybugs into the garden?