It’s only been two months since the chicks moved into their coop and run, but I’ve already come up with things I want to change to make it better.

I had the traditional kind sitting on a brick on the coop floor, but it took up so much space! So I switched to a PVC feeder.

“Test” Caps. For two Feeders, I picked up 4 from Lowes.

I glued one cap into the bottom of this PVC Fitting. This prevents food from getting stuck at the bottom that could never be reached. 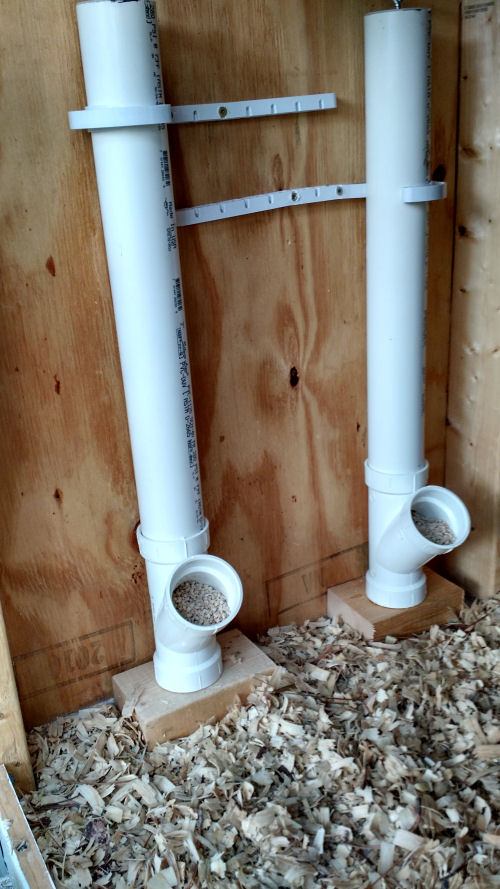 And here’s the final set up! I propped them each up on 2″x4″s just to raise them a bit. The 2″ PVC straight pieces are about 18″ long or so. I found hooks for 2″ pipe which make snapping them in and out a breeze! I did not want to use hose clamps because I knew I wanted to be able to remove them to refill them, to clean the coop, etc. so I’m glad I found these! These feeders free up so much floor space in the coop!

Finally I used a Test Cap to make a Lid. A hole was drilled, and an eyebolt with a nut in place.

I will say I heard a sad story about these feeders and a baby chick who got stuck in it trying to reach for food. So I would say this method maybe shouldn’t be used for small chicks just yet.

The waterer had the same issue and then some. It sat on a brick on the coop floor, taking up a lot of space and getting dirty really quickly. Also, when it got low, it would get tipped over and soak everything in the area.

So, we found this 6 gallon utility can in the attic. Perfect! I wanted to get the waterer off the coop floor and use Chicken Watering Nipples instead. 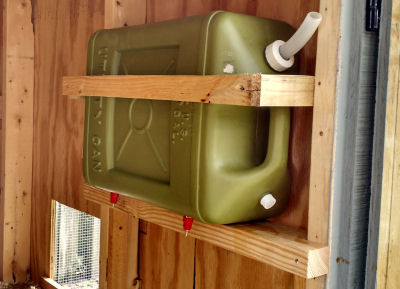 A shelf was installed (a 2″x4″)  between two studs for the utility can to sit on.A few 1x2s wrap around the top to keep it from falling over.

Eric installed a “sight line” so we can tell how much water is left in the tank! It was tricky to install the bottom portion without it leaking. It took a few tries to get the right goop to keep it water-tight.

Underneath the perches, is hardware cloth. Turns out, it was just really hard to clean. So I wanted to install a droppings board instead where I could just scrape it clean everyday.

I installed handles to remove it easier if needed.

I installed stick-down thick vinyl flooring so it would be easier to scrape clean.  This way is Much better than the hardware cloth!

Hope these Lessons Learned Help you in your Coop Design!